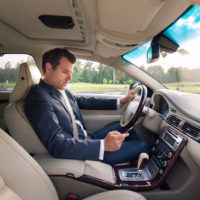 We’ve all seen drivers on Alabama roads whose heads are bobbing up to the road one minute, but down to their phone screens the next. Despite the increased public understanding of the threats posed by distracted driving, many drivers still believe they’re capable of safely texting while driving, or simply don’t care about the threat they pose when they do. One family has filed a lawsuit against a phone manufacturer in an attempt to seek justice for a lost loved one. In order to address the troubling rate of serious and fatal injuries resulting from distracted driving, federal lawmakers have introduced rules that would change how phones function when drivers are behind the wheel.

One of the many tragedies caused by distracted driving is the death of a five-year-old Texas girl. A driver using the video chat app Facetime was traveling in the same direction of the car carrying the young girl and her family. The distracted driver rammed into the rear of the family’s car at high speed, not having realized that traffic in front of him had stopped, and the girl was killed. In response to this tragedy, the family has filed a lawsuit against Apple for negligently failing to take steps that would have prevented this death. The family’s lawsuit claims that even though Apple had patented a method for disabling a phone when its sensors could detect that it was in the car, it had failed to install this feature. The family argues that Apple could have prevented the death, but failed to do so, and now owes the family money damages for their loss.

The National Highway Traffic Safety Administration has recently introduced voluntary guidelines which could help to reduce the potential for phones to pose a distraction to drivers. The guidelines are for use by phone manufacturers and software designers, and recommend the development of a setting known as “driver mode.” This setting would be activated when a car is switched from “park” into “drive.” It would disable certain distracting apps such as Snapchat, Facebook, and Twitter, and would make manual text entry impossible. In Alabama, texting while driving is against the law for all drivers. Evidence that a driver was texting when they caused a crash can prove valuable in a claim for damages based on that crash.

If you’ve been injured in an accident with a distracted or otherwise careless or negligent driver, call Attorney Gary Fillingim at the Fillingim Law Office and speak with a knowledgeable and dedicated Mobile, Alabama personal injury lawyer. The consultation and evaluation are free, and we never charge you anything unless we recover for you. Don’t wait, call us for your free evaluation at 251-445-7257, or visit us at www.Fillingimlaw.com.