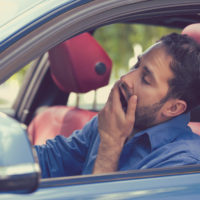 Health experts say that we need eight hours’ sleep a night to operate at our full capacity, but getting that amount of sleep can be a serious challenge. A recent study, however, provides new-found motivation to get the necessary eight hours, as researchers found that getting even slightly less than the recommended amount of sleep can result in a dangerous decrease in safety on the road.

The study on sleep’s relationship to driver safety was recently released by the AAA Foundation on Traffic Safety. The study used data gathered from the National Motor Vehicle Crash Causation Survey, which included data on crashes that were sufficiently serious to warrant emergency personnel being called to the scene of the crash, and where at least one vehicle involved had to be towed from the scene. Additionally, investigators who reported to the crash site took note of evident causes of the crash, such as evidence of driver errors or environmental causes. They also conducted interviews of the drivers involved, asking them how much sleep they had gotten the night before, how much they usually slept, and whether their sleep schedule had recently changed.

According to the AAA Foundation’s analysis of the data, even a slight reduction in the amount of sleep a driver got made them less safe behind the wheel. The researchers found a significant increase in the risk of a crash among drivers who received either less than seven hours’ sleep or a reduction of more than one hour of sleep from what they usually got. Drivers who told interviewers that they got four to five hours of sleep a night had a crash rate that was over five times higher than drivers who got seven or more hours’ sleep on an average night. When comparing them to drivers who received their normal amount of sleep the previous night, drivers who got two to three hours’ less sleep the night before had 1.3 times the crash rate. If they got four or more fewer hours of sleep the previous night, they were over ten times as likely to be involved in a crash. Drivers who got five to six hours’ sleep had nearly twice the crash rate of drivers who got seven or more hours’ sleep, and drivers who got less than four hours’ sleep had a crash rate of 11.5 times that of someone who got seven or more hours. If you believe the at-fault driver in your recent accident was driving while falling asleep, evidence regarding their sleeping habits and decision to nevertheless drive could be relevant to proving their liability. An attorney can help you gather this and other evidence to strengthen your claim for damages.

If you’ve been injured in a motor vehicle accident or crash with another car or truck in Alabama and want to find out if you have a claim for money damages based on your injuries, contact the experienced and effective Mobile personal injury lawyer Gary Fillingim for a consultation at 251-445-7257, or visit www.Fillingimlaw.com.